You might be interested in recent cricket world cup results, and most successful teams in cricket. The Australians are definitely worth mentioning first, since they were crowned cricket World cup winners four times: in the 1987 edition which took place in India and Pakistan, in the 1999 edition taking place in England, in the 2003 world cup which was hosted by South Africa, Zimbabwe and Kenya, and finally in the 2007 edition hosted in the West Indies.

Other successful nations include India, crowned world cup champions twice (in 1983 and, recently, in 2011), the West Indies who also won two titles in 1975 and 1979, and finally Pakistan who has won the world cup once in 1992. Pakistan however has been successful in a number of other tournaments like the World Twenty20 and the Austral-Asia Cup (three time winners in 1986, 1990 and 1994).

History is Great, But I want to Play!

Then you’ll need to bear with us for a moment, since the rules can be quite complicated if you are unfamiliar with the sport. We don’t hope to include everything in this article, but we’ll stick to the basics to you can understand.

Cricket is played by two teams totalling 22 players in all, in which there is a captain, a batsman and a runner. Like in any sport every role is important, there’s no “I” in team after all. The action takes place on a strip, where the batsman needs to stop the ball, thrown by a bowler (of the opposing team), hitting any of the three stumps on the ground (called wickets).

Somewhat similar to baseball, a batsman can be dismissed either by hitting wickets, if he hits the ball with anything other than his bat and a few other ways. A team can score with runs, which is when the batsman hits the ball; if the ball ends up outside the court without hitting the ground, it counts as six runs, otherwise it’s four.

Once a batsman is out, the team replaces him with another until there are no more and the game ends. This is essentially how the game is played, though the rules are much longer and complicated that that!

Though England dominated cricket in the early days of the sport, Cricet now enjoys world wide popularity and others are infringing on the domination of the founders of the game. England did win the Commonwealth Bank Series in 2007, and also managed the Natwest series (held in England) in the June-July of 2005, 2004 and 2003 (they win it mostly every time it takes place). The most successful nations remain India, Pakistan, Australia and the West Indies, though perhaps that will change as new rules and regulations are put in place in the game.

But it is all about watching a good game of cricket, and may the best team win, otherwise it’s just not cricket, is it?

Some Important Events in Cricket 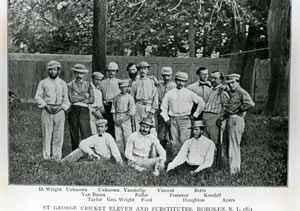 1877, March 15th: The First Test cricket match was played in Melbourne when eleven Australians (in actuality players from Melbourne and Sydney) defeated an English XI in a four-day match.

1971, January 5th:The first ODI (One Day International) was played at Melbourne Australia, between Australia and England. This match was won by Australia

1975, June 7th to 21st:First Cricket World Cup was played in England. This event has been held every four years since.

2007, September 11th to 24th:The inaugural event, the 2007 ICC World Twenty20, was staged in South Africa. The tournament was won by India, who became the first World T20 Champions after defeating Pakistan by 5 runs in the final at Johannesburg

Some Records and Results

The record for the highest career runs is held by the player considered to be the greatest batsman of all time, Sachin Tendulkar who has a total of 18,374 runs to his name, with 451 innings. Other notable batsmen are Ricky Ponting, playing for Australia, and Jacques Kallis for South Africa.

Hashim Amla currently has the highest career average of all time, but is still an active player. With a 56.49 average and a total of 2881 runs, Amla is ranked as the world’s top batsman in One Day Internationals.

Other players with a hefty career average include Michael Bevan, of Australia, Mahendra Singh Dhoni of India and Ab De Villers for South Africa.

Retired Pakistan player Shoaib Akhtar also known as Rawalpindi Express delivered the fastest ball in the history of one day cricket or test cricket since they started measuring speed.

Shoaib bowled to Nick Knite of England in a World Cup match in South Africa during 2003. The delivery was clocked at 161.3 km/h or 100.4 mph. He bowled again with the same speed in the next over to the same batsman. Note: Speed measuring is not officially recognized by the ICC, the ruling body of cricket. It is generally provided by private companies.