From frozen ponds to the present indoor game, hockey has really been an evolution and tapestry of different elements which can’t be traced to one specific time or period. Even so, through out it’s history are some interesting accounts of information and dates which have helped develop the game to what it is today.

The first hockey stick was created in Cape Breton Nova Scotia. Made by a Mikmaq native Indian. (2)

The modern skates were invented by EV Bushnell of Philadelphia in 1848. (3)

First natural indoor ice rink was the Quebec Skating Rink 1851, 1852.First indoor rink in the US was the Great Chicago Skating Rink in 1860. (4) 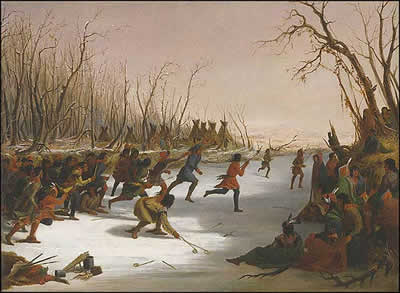 Earliest known arrival of game in the USA was 1856. It shows that St. Pauls high school in Concord New Hampshire opened that year. They were playing shinny to ice field hockey to ice polo. (5)

The first indoor and semi-organized game was played with 9 plaers per side in the Victoria skating rink Montreal on march 3rd, 1875. Organized by James Creighton using previous Halifax rules. (8)

The number of players were reduced to 7 in 1883 at the Montreal Winter Carnival. Positions were now named; Goalkeeper, Point, Cover point, Rover, Left wing, Right wing and Centre. (9)

1880 – Sticks, Pucks and Rules are Imported to USA

James Conover a schoolmaster there visited Montreal in 1880 discovered the modern rules and brought back sticks, pucks,and rules. (10)

In 1886 Burlington Vermont held a winter carnival and Montreal sent 2 teams to form a 3 team tournament. A local team called the Van Ness House Club from Vermont played The Montreal HC in first ever match between to countries. Montreal won 3-0. (11)

Other sorts of leagues and scheduled games were being organized around that time. Later in 1886 the Amateur Hockey Association was formed in Montreal, making it the first organized hockey league in Canada. (12)

1890-91 first goal nets were invented from ice polo at Storrs Agricultural School which is now known as Uconn. Early goalie like pads were worn same time there. (13)

The goalie trapper was invented out of a baseball mitt by Mike Karakas from Minnesota in the late 1930’s. (20)

Harvard’s Part in the Development of Hockey

Harvard has had a rich history to the development of the game. In 1911-12 coach Alfred Winsor would change the defense positions. Instead of having one in front of the other, he switched to a parallel formation which was called the Winsor System. (22)